My story:  About two years ago I quit my corporate-esque sales job in coffee and espresso and decided to follow my own dream.  The dream… a photo editing app that allows you to add rainbows to your photos.   I think most kids love and like to draw a lot rainbows but I was a little over the top about rainbows from a young age, so much so, that my parents called me their “rainbow girl.”

When photo editing apps started coming available I became obsessed with photo editing and self-taught myself Photoshop so I could make rainbow designs for greeting cards.  The idea of creating an app, seemed far-fetched, but one conversation led to another, and the next thing I knew I was developing a mobile app.

When it comes to the mobile app business, or specifically, my app Rainbow Love, I still don’t feel like I “know” what I’m doing.  I “know” I am working and learning new things every day, but I guess, as with any new business you try to launch, there’s a level of uncertainty mixed with passion, fear, optimism, ambition and common sense (when it’s time to let go and give up) that you have to learn to tangle with frequently.

“It’s the possibility of having a dream come true that makes life interesting.”
― Paulo Coelho, The Alchemist 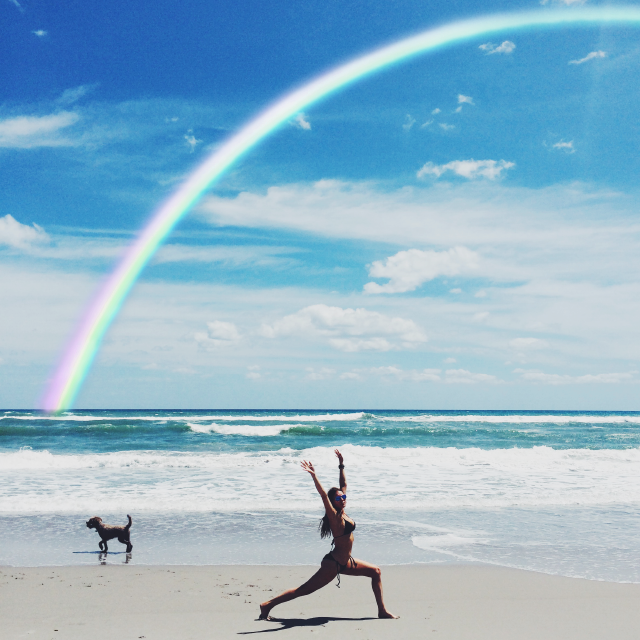 When the app first launched in November 2014, I truly believed I had an app store sensation on my hands, and that I would soon be running a booming mobile app company.  Six months later, I was lucky to get 25 downloads in a day.  I was working non-stop and becoming one-dimensional.  Which is not good.

My sister who is my best friend, and had started teaching yoga a year prior, and now runs her own corporate yoga company ProYoga suggested I get into the practice for my own sanity and well-being.  So in the spring of 2015 – I started a consistent practice of my own.  An opportunity came around at about that same time to enter a yoga teacher training that summer.  Uncertain of where it would take me, I committed to it, justifying the time commitment as, ‘well, it will be good for my practice,’ ‘I’ll make new friends,’ and ‘making a few extra bucks per week from teaching could help me support my app business if it continues to grow so slowly.’   I can pretty confidently tell you that had my app taken off before this, I really don’t know that yoga would have become such a big part of my life.

Fast forward to now… I learned a lot through teacher training which ended in September 2015, and actually I still reflect on the experience (some good, some bad) and continue to learn more from it.  I was exposed to so much during YTT, not just about yoga, asana, chakras, breathe and anatomy, etc. but about myself, connecting with others, how to accept things and or let them go.  I honestly can’t recall all the things I learned, or flip to a page in my journal, there were experiences I went through, during that time, that got buried within me with a faint memory and a specific emotion or perspective attached to it. I find myself repeating some of these experiences in similar ways now, and it’s as if I have this inner wisdom I can flip back to, to help me understand or learn / absorb “whatever it is the universe has been trying to tell me” now.  So… It’s ongoing.  YTT leaves such a mark that it never “really” ends.  And I’ll share more about that in shorter posts as I continue to blog here.

The point of >this< story is merely to share the transformational effect that YTT and becoming a yoga teacher has had on me personally, in my own practice and with my app and in dealing with the insecurity and self-doubt that can come with starting your own business.  When I started yoga the point was too destress, get in shape, get away from my computer and phone… What I didn’t expect was how it would change me, inspire me and transform me, my app and the direction of my business.

I didn’t expect the visions and ideas, flashes of color or a feeling that would come to me savasana and inspire new ideas for app art.  I didn’t expect the self-discovery and awareness it would bring me (some a little difficult); that helped me broaden and alter my perspectives and pre-conceived ideas which I have a terrible tendency to attach to relentlessly creating roadblocks for myself;  Yoga helped me to finally get a over a guy that took up too much space in my heart, soul and mind for way too long depleting my very best resources (about 60 class intentions did the trick ladies); and eventually, yoga inspired me to create a much better “yoga art” category within the app and eventually the concept of Yoga Asana + Rainbows, which really, should have been more obvious to me as I first started practicing yoga.  #RainbowLoveYoga

“And, when you want something, all the universe conspires in helping you to achieve it.”
― Paulo Coelho, The Alchemist

The first yoga class I taught was on October 15, 2015.   I didn’t start sequencing and teaching my own classes until about February 2016.   Early on, a manager of one of the studios I teach at, Sue Sultzer, who I consider to be a badass yogi, friend and mentor, took my class.  At the time, being insecure in my teaching and my new sequence, I was a little nervous to have her there.  At the end of class after staying in savasana past my “namaste-ing” out,  she slowly sat up and said “I felt like there were rainbows everywhere.”  It meant a lot to me as compliment, because I value her yogi-ness, respect and opinion.  But it was also such an interesting comment for her to make, because I made no mention of rainbows or Rainbow Love in the class (I never do), and it’s not as if it was a deliberate theme in music or sequence, lastly, she has a Samsung phone, so at the time, she had never even used my app.  What I took her words for, in addition to it being a compliment was that, much like my yoga has inspired ideas and transformation in my business and app.  My app and my passion for it, is actually reciprocating now and inspiring my yoga practice and my teaching style too.